Defending men’s doubles champions Jack Sock (USA) and Vasek Pospisil (CAN) will get the chance to win the title again at this year’s BNP Paribas Open in Indian Wells.

They fought hard to take a semifinal victory 4-6, 6-3, 12-10 over Spaniards Feliciano Lopez and Marc Lopez Friday. It took saving a tie-break match point, but they fought hard and did it. Next came an umpire call at 9-8, which the Spanish team disputed with great enthusiasm, thus losing some focus, no doubt. ‘Team PopSock,’ the No. 6 seeds on the men’s side, will next take on No. 7 seeds and Frenchmen Pierre-Hughes Herbert and Nicolas Mahout.

The Canadian and the American have appeared in three finals since they defeated  Simone Bolelli and Fabio Fogging in Indian Wells a year ago (winning one in Beijing). Their 2016 season record is now 6-1. 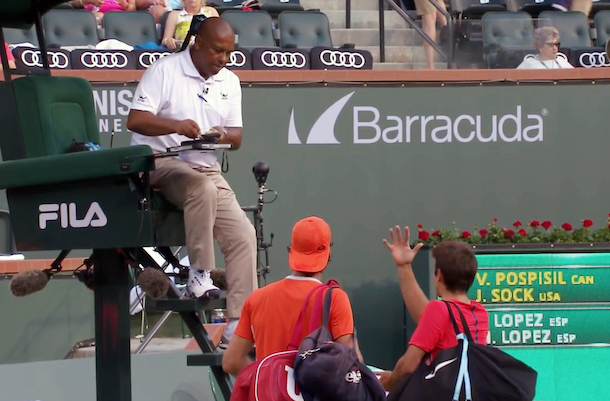 Feliciano Lopez and Marc Lopez continue to argue with umpire Carlos Bernardes after the match ends.