Good news, blues lovers; get ready for a vinyl reissue of the vintage LP Josh at Midnight.

In a massively influential career that spanned several decades, South Carolina-bred singer-guitarist Josh White(1914-1969) established himself as a pioneering musical force, a uniquely charismatic performer and a popular entertainer whose appeal transcended the racial and social barriers of the time. 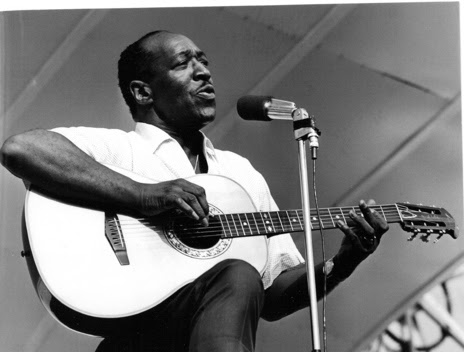 Photo courtesy of the Estate of Josh White, Sr.

At a time when African-American blues artists were routinely marginalized, White performed successfully on Broadway and in nightclubs, film and radio. He also emerged as a respected civil rights crusader and a trusted confidant of President Franklin D. Roosevelt, who in 1941 invited White to be the first African-American artist to give a White House Command Performance.
Despite the fame and success that he achieved during his lifetime, and his influence upon a diverse array of artists ranging from Nat “King” Cole to Bob Dylan, White has largely been forgotten by contemporary audiences. The roots-savvy North Carolina-based independent label Ramseur Records plans to return White and his music to spotlight with its vinyl reissue of the vintage LP Josh at Midnight, originally released in 1956 on the then-fledgling Elektra label. The album will be re-released in a deluxe vinyl edition on August 19, 2016.
Recorded with a single microphone by Elektra founder Jac Holzman over two nights in a converted Manhattan church in late 1955, Josh at Midnight finds White delivering spare, impassioned performances of a dozen spirituals and blues numbers. The artist is accompanied throughout the sessions by noted jazz bassist Al Hall and baritone vocalist Sam Gary.
By the time Josh at Midnight was recorded, White had been blacklisted for his social activism and his career was in decline. This situation prevented him from recording for larger record companies, but the idealistic Holzman (who was a staunch admirer of White’s music) was willing to take a chance. His faith was rewarded when White’s Elektra recordings became some of the struggling label’s biggest sellers, helping to revive the artist’s career and propel Elektra’s evolution from tiny indie imprint to successful industry force. Josh at Midnight remained one of Elektra’s top-selling titles for years, and became a fixture in many an album collection at the time.
As Holzman writes in his liner notes, “Josh at Midnight is probably the finest Josh White recording ever made. Sixty years later it still dazzles with the radiance of a great artist, thoughtfully recorded, whose contribution is unchallenged and firmly set in the bedrock of American vernacular music.”
The Josh at Midnight reissue is a labor of love for Ramseur Records founder Dolphus Ramseur, who’s been a committed White fan since childhood, when he first heard Josh at Midnight‘s lead track “St. James Infirmary” on a local radio station’s blues show. White’s music has remained a touchstone in Ramseur’s life ever since. After meeting Jac Holzman through their mutual association with the Carolina Chocolate Drops, Ramseur became determined to restore Josh at Midnight to the vinyl marketplace with the same attention to quality and detail for which Ramseur Records has become known.
The Josh at Midnight reissue was mastered with the participation of original producer Holzman, as well as legendary engineer Bruce Botnick and fabled mastering engineer Bernie Grundman.
“Josh was a special artist and this is a special record,” Ramseur comments.  “It wasn’t about making money — I just felt like this music should be available. Josh was such an important artist and a unique voice and he was a really big star at one point. I want more people to know about him, and this is a good place to start.”

Photo courtesy of the Estate of Josh White, Sr.