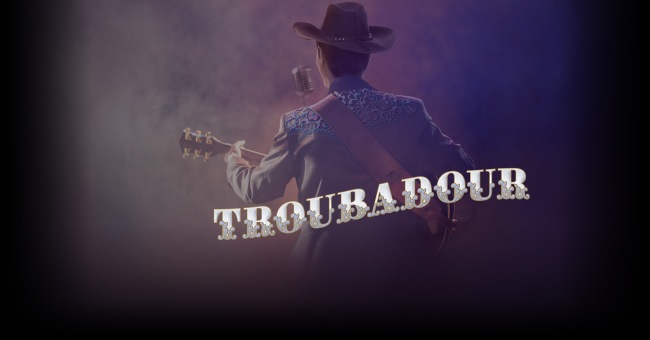 TROUBADOUR OPENS AT THE ALLIANCE THEATRE IN ATLANTA,
JANUARY 18 – FEBRUARY 12, 2017

Atlanta’s Tony Award® winning Alliance Theatre is pleased to announce the cast and creative team behind its upcoming world premiere musical, Troubadour, by playwright Janece Shaffer (The Geller Girls, Broke) with original music by Grammy Award-winning recording artist Kristian Bush.  Set in 1950s Nashville, Troubadour is a romantic comedy about an unlikely group of friends whose unconventional style changes the course of country music.  Troubadour is directed by the Alliance’s Jennings Hertz Artistic Director Susan V. Booth (One Flew Over the Cuckoo’s Nest, The Geller Girl) and runs on the Alliance Stage from January 18 – February 12, 2017.

“This is a deeply human story that will simply make people happy to witness,” said Director Susan V. Booth.  “I’ve been a fan of Janece’s writing for years and smitten with Kristian’s voice – literally and poetically – since back in his Billy Pilgrim days.  The two of them together, with our gorgeous creative team and crazy talented cast, are creating something really special.”

“We were so patient in our casting process.  We had an open call here in Atlanta and in Nashville.  We held auditions in New York.  We listened to hundreds of submissions and talked to so many people via Skype,” said playwright Janece Shaffer.  “What we were waiting for were those folks to come in the room and claim the role and everyone in this cast did just that.  And the fact that we found several of our leads in our own backyard – including Zach who is a hometown boy with a big bright future – makes it even more exciting.”

Troubadour will include approximately 16 original songs by Atlanta-based singer-songwriter Kristian Bush, whose career as a solo artist (2015’s critically-acclaimed Southern Gravity) as well as one-half of beloved duos Billy Pilgrim and Sugarland has spanned more than two decades.

“I believe music is supposed to tell a story, but I’d never tried writing it as part of a story before,” said Bush.  “Janece created characters who seemed so real to me that it was easy to get inside their heads and write their stories into songs, even as I travelled 60 years back in time to find their authentic sound. Now that we have this amazing cast to bring the story and the songs to life, I can’t wait to see what this becomes. Even though this was my first journey into understanding the fit between an actor and a role, I definitely understand the fit between a voice and a song… and these voices fit perfectly.”