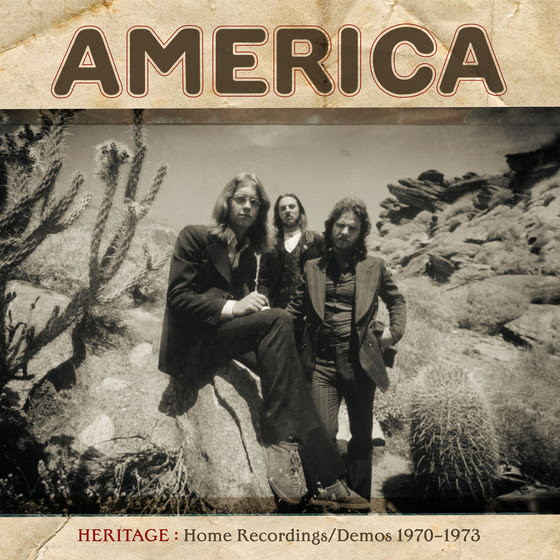 Set features 16 tracks — ten previously unissued — including a hidden bonus: an a cappella version of the band’s first #1 single, “A Horse With No Name”

Sons of U.S. servicemen stationed in England, Dewey Bunnell, Gerry Beckley and Dan Peek met in high school in 1967. The three teenagers ultimately formed a band that was inspired by the British Invasion. Soon they began writing their own material, a rich mix of pop, folk and rock, done in the burgeoning acoustic style that would soon achieve popularity worldwide. The group signed to Warner Bros. Records London in 1971 and needed a name . . . they chose America.

From 1970 to ’73, America released a string of singles for Warner Bros. Records that grazed the top of the charts: “A Horse With No Name,” “I Need You,” “Ventura Highway,” “Lonely People,” “Tin Man” and “Sister Golden Hair.”

Omnivore Recordings, in association with the group’s living founding members Bunnell and Beckley, will release Heritage: Home Recordings/Demos 1970-1973 on November 17, 2017. This is the most comprehensive collection of known demo recordings and unreleased songs from the band’s early formative years.

With ten tracks making their appearance for the very first time, Heritage showcases the hugely successful trio in its most embryonic and intimate form.

Fans will hear early demos recorded before America’s multi-platinum self-titled debut album from Chalk Hill Farm Studios outside of London; home recordings and previously unissued songs from Gerry Beckley’s Buzz Studios (his home in West Hollywood during the early ’70s); and an early take of one of the band’s signature songs (“Ventura Highway”) from Record Plant West in Los Angeles. And if you listen closely, you’ll find a hidden bonus track of the band’s first #1 single from 1972, a cappella!