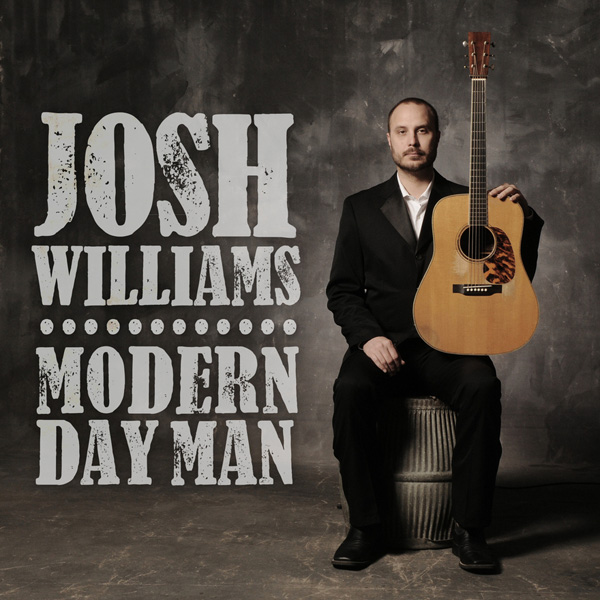 The cover of Josh Williams’ ‘Modern Day Man’ says it all. This is art. It’s a pure and simple portrait of artist and instrument. It looks like a portrait from time past, when those being photographed were required to sit still for an unnaturally long time in order for the image to be captured. Perhaps a musical ‘American Gothic,’ even. Sit still long enough to listen to the music inside and you’ll find the same straightforward tribute to American bluegrass; a contemporary artist exploring a traditional form, resulting in a reminder of the timeless value of such an endeavor. Or, maybe don’t sit still—several of these tracks (especially “Another Town”) will make it impossible to do anything less than tap your foot and smile.

The album (which features an all-star team of musicians including Rob Ickes, Sam Bush, Sierra Hull, Scott Vestal, Aubrey Haynie, Aaron McDaris and pedal steel legend Doug Jernigan, among others, performing songs from such writers as Tom T. Hall, Chris Stapleton, Harley Allen, Ronnie Bowman, and Jerry Douglas) overflows with Josh Williams’ powerful guitar-playing and his soulful vocals. His versatility allows for a collection that is both bluegrass and country. He could take his music in any direction the right song takes him and on ‘Modern Day Man,’ he covers plenty of territory—joy and darkness, temptation and redemption.

It’s an exciting time for bluegrass fans: Josh Williams already had years of experience as a member of the Rhonda Vincent band and three IBMA Guitar Player of the Year Awards to his name; now he has J.D. Crowe as a producer again. He’s doing great and doing even greater work. We can only hope for more.