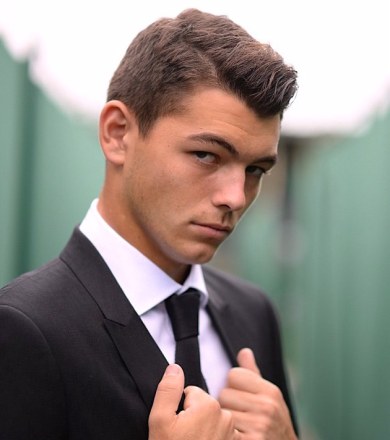 While celebrities were walking the red carpet, entering Arthur Ashe Stadium for the U.S. Open’s official opening ceremony, there were two tennis stars shining brightly on the adjacent court—Jack Sock and Taylor Fritz—the most exciting American tennis players around these days.

Taylor Fritz could someday be known as the Cary Grant of tennis (if, by then, people still remember who Cary Grant was, anyway). When you first see Taylor Fritz on the court, you think to yourself there must be a tennis movie being filmed here. Then you realize that there are no movie cameras around, except the Chase Review cams used to review challenged line calls, and that the crowd isn’t “extras” but real life, paying customers. The guy just has an old-school elegance about him. As much as it is fashionable to attack the link between the gentlemanly game of tennis and its elite history, there is something about that relationship that sustains the game over the years.

Just what is it about Mr. Fritz that captures the attention? Perhaps his unmistakable profile, or his just-waking-from-a-good-dream eyes, or his way of wearing a tennis outfit so it seems that Nike’s day-glo green is the height of natty fashion. He is stylish in a subtle, subdued way. Once told by an interviewer, “Everyone wants to be Cary Grant”, Grant is said to have replied, “Even I want to be Cary Grant!” You see, it’s no easy feat living up to the suave, cool, sophisticated image. Yet Fritz, even at the age of eighteen, shows signs of maturity and worldliness that recall the classy movie legend. It will serve Fritz well on the international tennis stage in the years to come.

The lanky, 6-foot-4 Fritz is currently ranked number 53 in the world. In this, his first U.S. Open appearance, he fought (and fought back) hard against fellow American Jack Sock, who is seeded 26th in the tournament. As for Sock, he dazzles in a Fourth-of-July-fireworks kind of way. With his unique on-court style, Sock is brilliance personified. There is something magical about the “did-you-see-what-he-just-did” strokes Sock dishes out on the court… especially those impossible to return down-the-liners.

Going into the Open, Taylor Fritz had a 12-16 record, with quarterfinals in Atlanta, Acapulco and Memphis. (In Memphis, he made it to the final). Fritz has a big serve and a powerful forehand, but they weren’t strong enough to overtake the current ‘King of the Forehand,’ fellow American Jack Sock. The two went the distance in the first round U.S. Open match, much like they did when they faced each other in round one of the Australian Open (which Sock won). Impressive as Fritz’s tenacity was, Sock (as expected) proved the stronger all-around player.
In the end, Sock defeated Fritz in five tense, uneven sets, 7-6(3), 7-5, 3-6, 1-6, 6-4.

Fritz’s impressive attitude should steer him in the right direction through the Grand Slams that stand between now and his possible destiny. There are still riddles to be solved on the court, pinpoint accuracies to be developed and a do-or-die energy to be summoned. But with his naturally graceful style, and his classic tennis persona in the making, Taylor Fritz is well on his way. 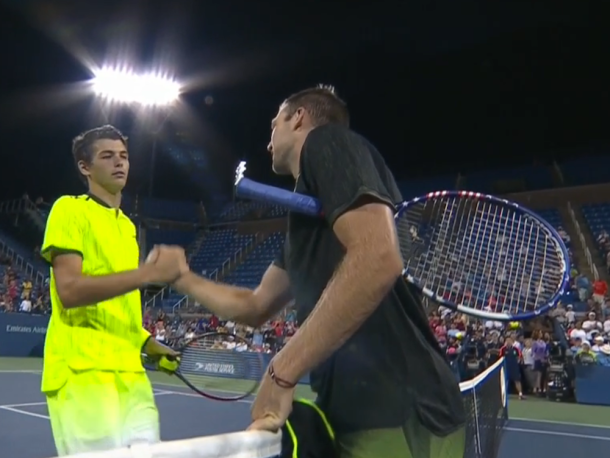 One thought on “Tennis: Taylor Fritz Impresses At His First U.S. Open”