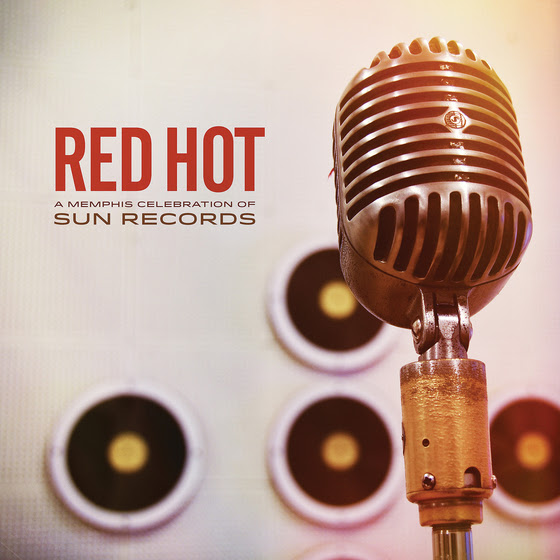 Red Hot: A Memphis Celebration of Sun Records is a jubilant, homegrown album honoring the legacy of the tiny independent label that changed the face of popular music.

All proceeds from the Americana Music Society release, due June 16, 2017, will benefit St. Jude Children’s Research Hospital®, leading the way the world understands, treats and defeats childhood cancer and other life-threatening diseases.

The collection is co-produced by singer-guitarist Luther Dickinson of the North Mississippi Allstars, and Tamara Saviano, the Nashville-based writer-producer and author of Without Getting Killed or Caught: The Life and Music of Guy Clark. A cast of roots music notables celebrates the work of Sam Phillips, an inaugural Rock & Roll Hall of Fame inductee who founded his Sun label in 1952.

The new album’s personnel sport a direct connection to Sun’s history — Luther Dickinson and his younger brother Cody, the North Mississippi Allstars’ drummer, are the sons of late musician-producer Jim Dickinson. Sitting in as vocalist and pianist with the Jesters, a Memphis garage band that included Phillips’ son Jerry among its members, Jim recorded “Cadillac Man,” one of Sun’s last singles, in 1966.

The Dickinson brothers serve as the hub of Red Hot’s house band, which also includes bassist-vocalist Amy LaVere, one of the Bluff City’s best-known front-women; singer-guitarist John Paul Keith, a solo notable and a former member of the Tearjerkers; and keyboardist Rick Steff, whose credits include work with Cat Power, Dexy’s Midnight Runners and Memphis’ own Lucero.
Keith, LaVere and Luther Dickinson take lead vocals on numbers originally performed by Phillips’ artists — respectively, Warren Smith’s “Red Cadillac and a Black Moustache,” the Miller Sisters’ “Ten Cats Down,” and Howlin’ Wolf’s “Moanin’ at Midnight.”

Cut intimately and live at the music’s historic sources, Red Hot: A Memphis Celebration of Sun Records restates Phillips’ inclusive, democratic mission for music in contemporary terms.
As Alanna Nash writes in her liner notes, “Like Walt Whitman, Sam Phillips heard America singing … What he heard on the streets of Memphis was inspiration in the untutored voices of both blacks and whites. What he hoped to find was untried and unproven talent, especially that of regional performers who had the affinity to express themselves, but never had the opportunity to record. And in opening his Memphis Recording Service in 1950, and two years later his little Sun Records, he sold hope to people who had none.

“He believed in individualism in the extreme. (‘To the extreme!’ he would say, in that half-preaching way.) And he believed, with his ferocity of focus, that the voice of the common man would ring clear in the end.”