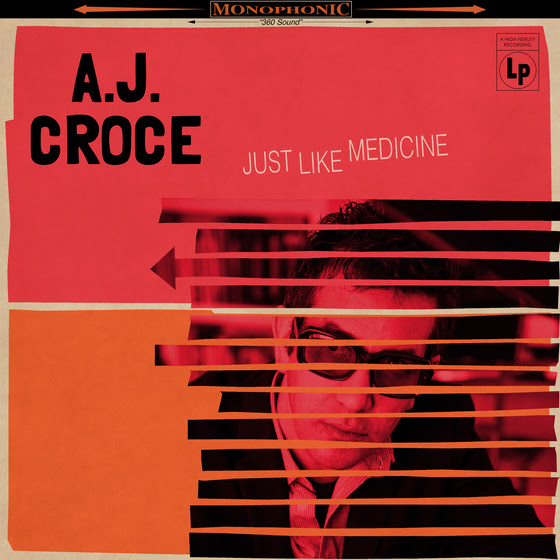 “Name of the Game” is released on A.J. Croce’s ninth studio album, Just Like Medicine, in stores August 11

As the son of legendary singer-songwriter and Songwriter Hall of Fame inductee Jim Croce, A.J. chose to not follow in the folk footsteps of his father, and instead forge his own musical path in his career. Only after 18 years of an established career did A.J. Croce begin to explore playing a song or two of his Dad’s at shows.

A.J. was only two years old when Jim Croce died in an airplane crash in 1973, so he didn’t know his father’s music firsthand. Instead, “I came to love it in the same way everyone else did,” he explained, “by listening to the albums.” While he describes his father’s music as “part of me, part of my life,” A.J. had never really performed those songs live. As a piano player, his interests tended to favor the blues and jazz-rooted music of musicians like Ray Charles and Allen Toussaint.

A few years ago, however, A.J. was digitizing some of his father’s old tapes and came across a cassette filled with covers of old blues and folk tunes by the likes of Fats Waller, Bessie Smith and Pink Anderson. It was a revelation to him. “He was playing stuff I played myself,” A.J. says, adding that “stuff made sense” discovering that his father and he had “all the music in common.”

When it came time for A.J. to record his ninth studio album in 2017 (Just Like Medicine, due out August 11, 2017 on Compass Records), and bring songs to his producer, Dan Penn, A.J. brought 16 of his own and snuck in “Name of the Game,” written by his father. Without having been told about the song’s origin, Penn chose it for the record and said that it reminded him of A.J.’s father.

The track is notable for many reasons. One is that it finds A.J. Croce connecting with a part of his soulful legacy that hits close to home because the bluesy gem is a previously unreleased song by his father — the only known completed song written for the elder Croce’s next album, and the last song that he wrote. A.J. explains, “‘The Name of the Game’ is a song I had known about for a really long time. It was destined for my dad’s next record that he never got to make. The song had been bootlegged, just him playing guitar, but it had never been properly recorded. I thought this song really fit this album. We listened to a couple of my father’s demos and final recordings and tried to treat the song with the respect it deserves — while still making it my own. At the beginning of our track, Colin Linden — who’s amazing — is playing the same guitar my father wrote the song on. You can tell it’s a Jim Croce song, no doubt. And I just love Vince Gill’s playing, so I called him up to add his musical touch to it too.”

Jim Croce found long-overdue success in 1972 following years of struggling to make a name in the music business. That year he released two albums, You Don’t Mess Around With Jim and Life and Times, that spawned the hit singles “You Don’t Mess Around With Jim,” “Operator (That’s Not the Way It Feels),” “Time in a Bottle” and “Bad, Bad Leroy Brown” (the latter two tunes both reached Number #1). His final studio effort, I’ve Got a Name, was released in December of 1973, less than three months after his death. Three more hits (“Workin’ at the Car Wash Blues,” “I’ll Have to Say I Love You in a Song” and the title song) came from that album, which reached #2 in the album charts. A.J. pointed out that these three classic albums amazingly were recorded in just a one-and-a-half-year time period. Both Jim Croce and his longtime collaborator, lead guitarist Maury Muehleisen, died in that fatal plane crash in 1973. Jim Croce was just thirty when he died, and has had his folk-rock music remain popular over the years. His record sales have surpassed the 45 million mark, and his songs have appeared on more than 375 compilations. Jim Croce’s music continues to be used in films, television shows, and commercials including X-Men, Transparent, and the recent Apple Siri commercial.

A.J. Croce has been inextricably linked to a version of his own story by virtue of his name. He’s experienced a lifetime of comparisons to a father he lost at age two, whose music bares little resemblance to his own output yet still serves as a reference point despite the years that have passed and the many iconic mentors who have stepped in to offer their counsel, creativity, and endorsement throughout his long career.

It’s curious then that it now feels necessary to include the reference, as enough time has passed that a new generation of tastemakers and journalists might not know who Jim Croce was — that he was a golden-voiced everyman, a singer-songwriter-guitarist who died too soon, leaving one of pop music’s most beautiful and memorable ballads (written about a young A.J.) in his wake.

Croce the younger, on the other hand, is a piano man, first and foremost, and a vocal stylist second. His muted growl pulls from a host of American traditions and anti-heroes — it’s part New Orleans, part juke joint, part soul, but somehow evokes New York, a continuum where John Lurie meets Lou Reed. He is further a songwriter, driven by a personal muse, informed by a life on a boomerang of tragedy.

His gritty and accomplished ninth studio album, produced by legendary soul singer-songwriter and producer Dan Penn, is the latest and arguably greatest effort yet. Penn, of course, is writer of such hits as “The Dark End of the Street,” “Cry Like a Baby,” “I’m Your Puppet” and “Do Right Woman, Do Right Man,” and producer of The Box Tops’ “The Letter,” as well as songs and recordings by Jerry Lee Lewis, Bobby Blue Bland, Clarence Carter, and Alex Chilton. Also making appearances are Grammy Award-winning country artist Vince Gill, Steve Cropper (Booker T. & the MGs, Blues Brothers, author of many Stax hits), the McCrary Sisters and the Muscle Shoals Horns. In addition to the Jim Croce composition, there’s a tune written by A.J. and Dan Penn, as well as a co-write by A.J. and the late great Leon Russell.

Just Like Medicine is an exploration of relationships, the disappointments and the confusion, and reflects Croce’s realization about the role music has played in his life. “I’ve been to therapy for 25 years and it never helped me as much as sitting down and playing the piano or writing a song.”

As he explains, “I wanted to make a real soul album, but not a throwback Stax album or a Motown album or anything like that — even though Dan was producing and there are great players from that world and Muscle Shoals on these tracks.” Sonically and in every other way, the intention on Just Like Medicine seems to keep things real. “We recorded this album in mono, to analog tape, primarily to two tracks and we never used more than sixteen tracks,” says Croce.

“We did that not to be cool or trendy, but because these days everyone seems to be listening to music primarily on little devices and tiny speakers. In a world of amazing audio possibilities, we’re all basically listening to music on transistor radios again. After that first session, Dan explained that when he worked with the Box Tops, they only had like three tracks — one for the band, one for the vocals, one for string and horns. So that became our starting point.”
Croce has lived longer now than his father did — at 45, he is 15 years beyond the age his father was when he died. With Just Like Medicine, an authentic version of his story, which contains both unimaginable sorrow and many blessings, can be felt and understood.