For more than two decades, the Louisiana Hayride radio show was a Saturday night staple for music lovers. Broadcast by Shreveport, Louisiana’s KWKH-AM from 1948-1960, Hayride stood as the chief rival to the now better-known Grand Ole Opry. While the Opry favored established Nashville stars, Hayride offered headliners and newcomers alike an opportunity to perform. It was this policy that led Hayride to say “yes” to a young singer from Tupelo, Mississippi after the Opry said “no.” That singer, Elvis Presley,debuted on the show in October 1954 and later made his first TV appearance on the television version in March 1955.

Presley’s 15 songs here (which include “That’s All Right,” “Baby Let’s Play House,” “Heartbreak Hotel,” and “Don’t Be Cruel”) are just a fraction of the more than 500 tunes stocking At the Louisiana Hayride Tonight. Bear Family Records’20-CD box set holds a treasury of long-buried live Hayrideperformances — many of which have never been heard since the day they were broadcast — with perhaps the rarest of these rarities being the previously unknown recording of “I’m a Long Gone Daddy” by Hank Williams. 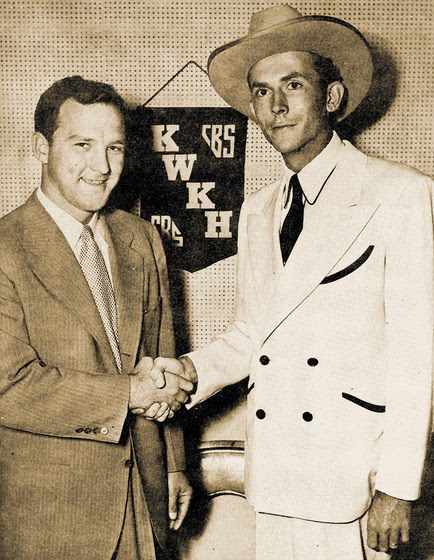 The compilation has been constructed in chronological sequence. Throughout the 20 discs songs are interspersed with the Louisiana Hayride theme tune (“…we’re gonna have a wonderful time…”), and with show announcements, intros, ads, comedy routines, and even mistakes, giving listeners a real sense of what it was like to hear the show on the radio, or to have plunked down your 60¢ (or 30¢ for children) for a ticket to watch it live in Shreveport’s Municipal Auditorium. One of these stage announcements, in fact, is the old-time emcee Horace Logan making the now-famous proclamation that “Elvis has left the building.” 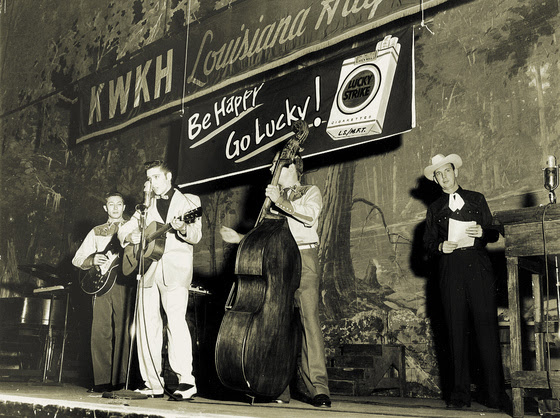 Eighteen of the set’s CDs cover the classic weekly Louisiana Hayride broadcasts that took place from April 3, 1948 until August 27, 1960. The other two CDs collect material from some post-1960 shows, along with commercial recordings made in the KWKH radio studios, promotional discs, and transcribed shows from KWKH’s early days. Among the studio-recorded commercial tracks are hits by Slim Whitman, the Browns, Mitchell Torok, Jim Reeves, Mac Wiseman, and Carolyn Bradshaw. Additionally, there are 11 “as live” studio-recorded transcriptions that feature selections from Kitty Wells, Johnnie and Jack, Hank Williams, and Curley Williams.

Louisiana Hayride was known as “The Cradle of Stars,” and At the Louisiana Hayride Tonight’s lengthy track-list provides plenty of reasons for that. The CDs’ 167 acts reveal a who’s who of country music royalty (George Jones, Johnny Cash, Kitty Wells, June Carter, Roy Acuff, Webb Pierce, Faron Young, Ernest Tubb, Roger Miller, and Jim Reeves) along with regional heroes such as Cajun stars Doug and Rusty Kershaw, and California country stalwarts Rose Maddox and Wynn Stewart.The set serves as a reminder too that Hayride was about more than just country music. Presley obviously brought rock ’n’ roll to the show, but there was also rockabilly from Warren Smith, Werly Fairburn, and Bob Luman, bluegrass from the Louvin Brothers and Dobber Johnson, and yodeling from Slim Whitman.

Besides presenting a wealth of little-heard recordings with stars singing their hits, the set also shows them playing cover tunes (Presley does “Maybellene” and “Long Tall Sally”), performing in a character (Ferlin Husky shows up in his comical persona Simon Crum), and doing commercials (Johnny Cash plugs Southern Maid Donuts as the “best in the world”). This extraordinary release also provides the chance to enjoy the other Johnny Mathis — “Country” Johnny Mathis — as well as to discover such lesser-known acts, such as Marlene Allen, Doug Bragg, Dean Evans, Fay Darling, and Joe Janka.

At the Louisiana Hayride Tonight is the latest in the Bear Family Records’ highly acclaimed series of releases exploring roots music. This collection, which comes in an LP-sized package complete with a 224-page hardcover book, not only takes a comprehensive look at Louisiana Hayride but also offers an exhilarating portrait of the American music scene during the late ’40s into the early ’60s.