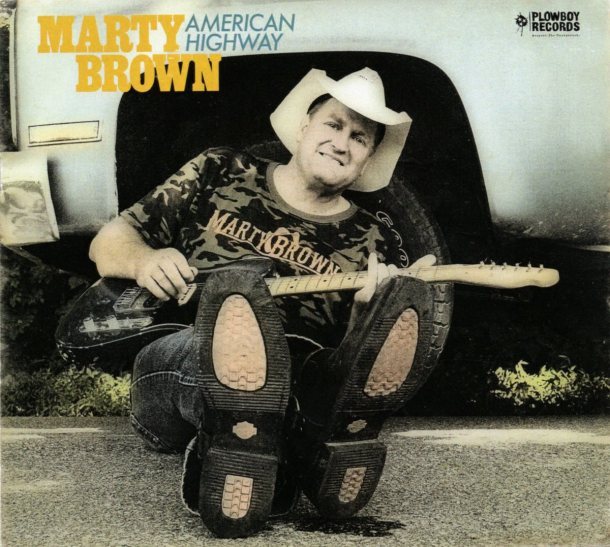 American Highway is Marty Brown’s first album in two decades. He may have taken twenty years off from recording, but he hasn’t lost any of the instinct and knowledge that we once expected from him. Instead, Brown seems to have only gained from the experience — increasing his powers of observation and storytelling — in the meantime.

This album includes a wide range of songs full of emotion, delivered with consummate musicianship. With this solid return to the studio, Brown shares production credits with Jon Tiven, with whom he co-wrote all of the disc’s ten songs. Kristopher Martin Brown contributed to the songwriting of one particularly catchy track, “I’m On A Roll (Better Than It’s Ever Been.” Every song in this collection has a high degree of flair, each in their own style, yet all of them rooted in traditional country music.

I’m eager to ponder just what might be expected in the future from this expansive talent. “More” is once again an exciting word.

To purchase this album on iTunes, click here.
About Marty Brown:
Born in Maceo, Kentucky, Brown first rose to fame as an artist on MCA Records in the 1990s, but he is also known as the songwriter behind mega-hits for Tracy Byrd (“I’m From The Country”), Brooks & Dunn (“It Ain’t Me If It Ain’t You”), and Trace Adkins (“When I Stop Loving You”). After releasing three albums for the label, Marty disappeared from the public eye. Though he still traveled to Nashville occasionally to write, Brown spent most of his time with his family in Kentucky. He returned to the national stage with a show-stopping performance on America’s Got Talent in 2013. His touching rendition of Bob Dylan’s “Make You Feel My Love” went viral, generating over 11 MILLION views on YouTube. The rest, as they say, is history. His Top 10 AGT finish convinced Marty to step back into the spotlight and since then he has performed at the historic Ryman Auditorium, returned to the Grand Ole Opry stage, and signed autographs at CMA Music Fest.