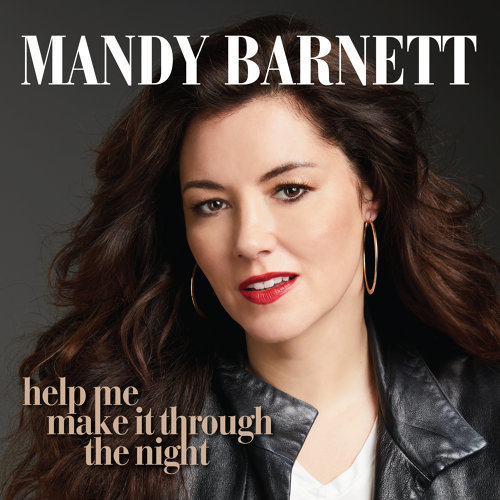 Mandy Barnett — “Help Me Make It Through the Night”

Originally a hit by Sammi Smith, “Help Me Make It Through The Night” celebrates its 50th anniversary this year. Kristofferson was inspired to write the song by an article he read in Esquire about Frank Sinatra. When asked what he believed in, Sinatra replied, “Booze, broads, or a Bible…whatever helps me make it through the night.” The song went on to win two Grammy Awards for Best Country Song and Best Country Vocal Performance, Female in 1971. Mandy Barnett has been called “a song’s best friend” and she demonstrates why with the release today of the Kris Kristofferson classic from her upcoming Melody Place debut album, A Nashville Songbook. Listen HERE.

Barnett brings her emotional depth and interpretive skills to “Help Me Make It Through The Night,” which has a deeply personal message that is tender, yearning, and timeless.

“Sometimes you just sing a song and it seems to fit like a glove,” said Barnett. “With songs like this, it’s important to capture it in its entirety, recording it in one take – not splicing lines together. The performance as-a-whole is what really matters, not perfection. It’s capturing that emotion in that moment.”

“At a time when people are feeling isolated by this pandemic, we all felt strongly that Mandy’s brilliant and intimate version of this great Kristofferson song would be something that would resonate,” said Mollin. “It doesn’t get more basic than the need to be held and to share human contact with another person.”

A Nashville Songbook is a collection of songs that made Music City famous. The project will be released later this year and distributed by BMG. The album pays homage to iconic country and pop standards by legendary artists including Ray Price, Roy Orbison, Tammy Wynette and George Jones, Elvis Presley, Hank Williams, Anne Murray, Hank Snow, and Brenda Lee, among others; and written by the likes of Harlan Howard, Boudleaux Bryant, Chips Moman, Orbison, and Williams.

Encouraged by her friend and mentor, Country Music Hall of Fame member Harold Bradley, Barnett first debuted the “Nashville Songbook” repertoire with the Nashville Symphony in 2016 and has since toured it nationally and international to rave reviews and standing ovations from fans clamoring for more. She made her New York City cabaret debut of “Nashville Songbook” in 2019 at Feinstein’s/54 Below, including a duet with Michael Feinstein.

“So many songs with a Nashville connection are worldwide country and pop standards, reimagined over-and-over again and as deserving of praise and preservation, I believe, as the Great American Songbook canon,” Barnett said. “A Nashville Songbook is a snapshot of a group of tried-and-true songs from a town that made its mark as one of the most prolific and creative centers of popular music.”

Called the “Nashville Sound Chanteuse” (Music Row), Barnett has built a reputation for her commanding voice and unwavering devotion to classic country music and the pioneers who created it. Barnett first gained national prominence as the original star of the stage musical “Always…Patsy Cline” at the famed Ryman Auditorium.