This morning indie sensation Cody Johnson woke up to the news that his album GOTTA BE ME was sitting at #1 on the iTunes Country Album Chart and #2 on the iTunes All Genre Album Chart. GOTTA BE ME is available in stores now and on iTunes here. Rolling Stone Country claims “Johnson confidently asserts his musical independence throughout Gotta Be Me and yet finds himself rapidly hurtling toward mainstream stardom with a unique concept in his arsenal: actual country music.”

Johnson’s success is one more reminder of both the power of traditional country music, and the genuine thirst fans have for it. His explosive live shows have earned comparisons to Chris LeDoux and the on stage passion of Garth Brooks, and his voice has been deemed as instantly identifiable as that of country King George Strait. Couple his fiery on stage persona with the powerful delivery of well-lived lyrics in “Cowboy Life” and “Gotta Be Me” and you begin to see why Johnson stands out in today’s country landscape as unique and authentic – and why fans adore him for it.

GOTTA BE ME brings into focus a picture of a man who describes himself as, “a God-fearin’, hard-workin’, beer-drinkin’, fightin’, lovin’ cowboy from Texas,” he grins. “That’s about it.” 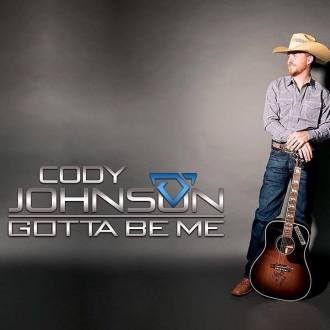 His story is the kind that movies are made of, and books are written. Johnson rose from humble beginnings in Sebastopol, to country star on the rise with fans all over the nation.  In what may now seam like former life, Johnson was a prison guard on horseback watching over prisoners as they worked and sang in the fields.  He is a former rodeo rider, with all of the buckles, broken bones and stories that go with it. Johnson is a man of grit.  He is a man of his word.  A man whose unyielding work ethic is now paying off as he relentlessly tours the nation selling out venues from California and Colorado, to Louisiana, Tennessee and Georgia.
Rave reviews are pouring in for GOTTA BE ME. Johnson has topped the Sirius XM Horizon Playlist climbing to #1, and now he has topped the iTunes Country Album Chart claiming the #1 position for the first time in his career.  It is clear, his star is on the rise.