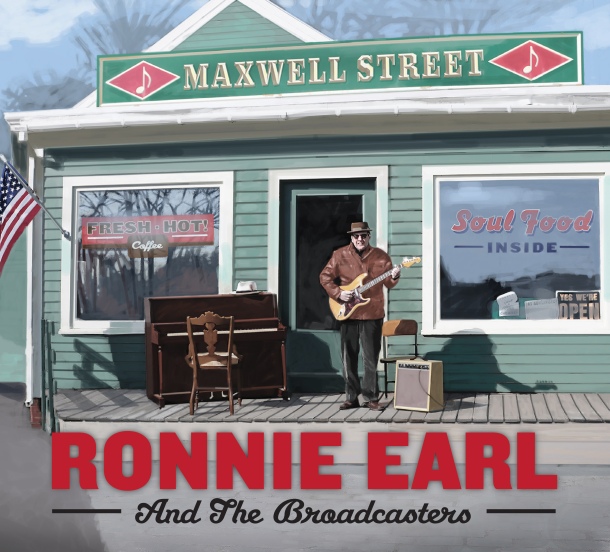 Maxwell Street, the new album from Ronnie Earl And The Broadcasters, is a tribute to both the storied Chicago street but also former band member David Maxwell, who passed away last year. Fitting, then, that the highlight of the album is a track titled “Blues For David Maxwell.” The song is an outpouring of devotion that supercedes any blues you’ve heard in a longtime. The song starts gently, with Mr. Earl bringing the listener in, and the band making sense of each instrument’s contribution to the whole to such a degree that by the time it really starts to take off, the listener is totally involved, and leading the way, emotionally. In the end, the exploration is complete and there is simply nothing left to play. What better statement/show of respect could there be than this profound expression?

The album, which lives up to the standard set by this track, was produced by Ronnie Earl. The current Broadcasters line-up includes guitarist Earl, bassist Jim Mouradian, keyboardist Dave Limina, drummer Lorne Entress, and singer Diane Blue. Guitarist Nicholas Tabarias is a special guest on the album.

Maxwell Street features ten tracks, including six original songs as well as covers like Otis Rush’s “Double Trouble,” Gladys Knight’s “I’ve Got To Use My Imagination,” Eddy Arnold’s “You Don’t Know Me,” and Don Robey’s “As The Years Go Passing By.” Anyone looking for some of the finest arrangements, instrumentations and performances around will find them on Maxwell Street. It’s a street (and an album) that any blues lover wishes might go on forever.

Essential Downloads: “Blues For David Maxwell,” “As The Years Go Passing By.”