Black Hawk Aviator Crew (Camp Bondsteel, Kosovo)
Camp Bondsteel is the main base of the United States Army under KFOR command in Kosovo and serves as the NATO headquarters for KFOR’s Multinational Battle Group East. We spent the day with our Aviation, Medevac and Infantry men and women and then played a few songs for them and even got a few of them up on stage to sing with us!

Rebel Engine Recording Artist Lucas Hoge devoted the month of May to thanking members of the military for their service in person. This marks the 8th year for Lucas’ month-long tour overseas performing for and getting to know members of the armed forces. During his trip Hoge was privileged to make stops at Mildenhall Air Force Base in the UK and bases in Southwest Asia including Jakarta, Indonesia; Amman, Jordan; Ferizaj, Kosovo as well as other various undisclosed locations.

“After 8 years of going over to play for our troops, I’m still so honored that I continue to get to go on these tours. Being able to sit and talk with our service men and women face to face and thank them and get to know them is an experience that will stay with me forever. God Bless America and God Bless our Troops.”

An avid supporter of our men and women in uniform, Hoge has been all over the world performing for the troops. Since 2010 he’s been to Jordan, Jakarta, Kosovo, Iraq, Afghanistan, Pakistan and Africa to name only a few.

Hoge is now back to the States and touring in support of his new radio single “Dirty South.” Lucas will perform an acoustic set at the ASCAP Music City Stage during CMA Music Festival on Sunday, June 11 at 1:20pm. 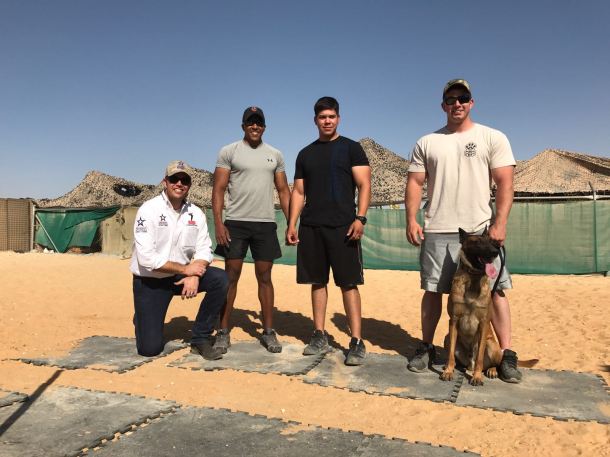 Photo Credit: Robi Powers
Undisclosed base in Amman, Jordan
Had a great time hangin out and seeing our military K-9 unit in action. They are the best at what they do, helping protect our service men and women and saving countless lives in the line of duty.