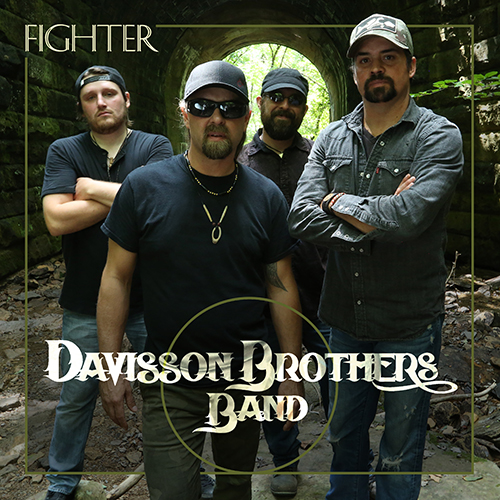 Theirs is a gritty, energetic sound. It’s the sound of Southern-rocking loyalty. It’s the keeping-it-real sound of hard-working, proud-of-the-work-they-do, Americans. If Westerns had been set in the hills back east, these guys would have given the cowboys a run for their money when it comes to honest-to-goodness role models, for theirs is the contagious sound of freedom. And a whole lot of fun.

Davisson Brothers Band is made up of Donnie Davisson (lead vocals and guitar), his brother Chris Davisson (lead and slide guitar), Rus Repert (bass), and Aaron Regester (drums). The Davisson Brothers Band sound is a mix of country and rock, with a whole lot of their native Appalachia. Their ancestors played an important role in the history of Clarksburg, West Virginia, and now they’re making music that shares life in the West Virginia hills with the rest of the world.

No doubt you’ve heard the group’s single—”Po’ Boyz”—but prepare yourself to discover just how fun and energetic the rest of the songs are on their album, Fighter. The album debuted at No. 3 in the USA, No. 2 in Australia on iTunes Top 40 Country Album charts, and at No. 15 on Billboard Country Album charts.

Recently, I talked with Chris [CD] and Donnie Davisson [DD] about how they got to where they are now, and where the band is heading. Here is some of that conversation…

DD: We’re in Nashville for the moment and we’re headed back out on the road tonight. We have a couple of shows in West Virginia this weekend.

GV: When are guys coming to New York City?

DD: I’m not sure of the exact date yet, but we will be playing at a music festival at a ski resort near there.

GV: OK, I’ll be on the lookout for that. So, when you’re away from West Virginia–which is home to you–what is it you miss most?

DD: The family, and the old farm. I’m just a good ol’ country boy and outdoorsman when I’m not onstage. I like to hunt and fish and go see Dad and my uncles and everybody out on the farm…

GV: So is there a distinct West Virginia “sound”?

DD: I’m not sure if it’s just West Virginia, but I can tell if an artist is from that region. West Virginia, Kentucky, there’s some kind of vibe from there. And there are a lot of great musicians from that area. There’ve been a lot of stars come out of West Virginia and eastern Kentucky. You can tell in the writing of a song, and the way a guy sings, too.

DD: Things are just a little simpler, and laid-back. I think the music we write, and what we sing about is just how we were raised. We’re just being honest and true to our culture.

GV: When were you guys first exposed to music? Was it a family tradition?

DD: Yes, from when I was a baby. My dad, Eddie Davisson, and my uncles, my grandparents, my entire family… Music has always been a huge part of the Davisson family. People ask me, “When did you learn to play the guitar? Who taught you?” Well, it was just always there. I was out singing with my dad and my uncle when I was four years old, and I’ve never stopped. I started a couple years before my brother Chris, but by the time we were in middle school we were out making money at it a couple nights a week. All the way through high school, we played a lot of sports—football, basketball, baseball, wrestling—but when the weekend came, we were on stage, usually with Dad or Uncle Pete. We’ve been making a living at it since we were kids.

GV: Do you remember the first record you ever bought with your own money?

DD: The first record I ever bought with my own money? My brother Chris knows his. I’ve got two or three, but I can’t remember which one was first.

GV: What was Chris’ first?

CD: Well, my first one was Lynyrd Skynyrd’s Street Survivors…

CD: Then it was Cinderella.

DD: (laughing) We’re country guys but we had to have a little of that 80s rock. A little Bon Jovi, Cinderella, Def Leppard. Our Uncle Pete had a great album collection, so one day we would listen to Bob Seger and the next day we’d listen to Willie Nelson or James Taylor or The Marshall Tucker Band or Charlie Daniels. I grew up on a huge variety of music, but it was all good music.

GV: How would you describe the Davisson Brothers Band sound?

DD: It’s real, it’s raw, it’s high energy. It’s honest. I think our sound evolved from growing up around all that different music, and from playing so much music. We’ve always worked hard at it. We’ve always tried to go further, to make our circle bigger. We worked our way across the United States, and then all the way to Australia. I think meeting different people, different personalities all has played a big part in the music we’re writing and the sound we’re putting out. Our sound is very different than anything else, in my opinion. My brother plays an acoustic guitar with all these different, crazy acoustic and electric guitar strings mixed together, with a slide on an acoustic Marshall amplifier. It’s so different and so unique.

GV: But it works.

GV: I’ve noticed that all the songs on your album, Fighter, has a certain spirit to them… a definite energy. There’s the Davisson Brothers Band, the album Fighter, and a renewed “can do” spirit in America. This may be all an assumption on my part, but have you guys picked up on any of this feeling in your audiences when you play your songs?

CD: Yes. That’s what we write about. We write about the world around us. Every note and every lyric on the album represents us and our everyday lives. Where we’ve come from, where we’ve been, and where we’re headed.

GV: Your timing is incredible. It’s been a few years, but it feels like people are finally feeling like they have permission to be proud of to be Americans, and to work hard and to play hard.

CD: Yes, we are definitely proud.

GV: I’m sure you guys are going to have some amazing audiences when you go out on the road with this album.

DD: Thank you, because we take a lot of pride in where we come from. We’re proud of who we are and everything around us, and I think it comes across on the record.

GV: I think so too. And I’m sure my neighbors in my New York City co-op agree, since I usually play it pretty loudly.

GV: I’m sure their favorite song is “Appalachian American” too, since that’s mine.

CD: That song means a lot to us as well.

GV: If there was one thing that you would like to convey to fans about yourself and your music, what would it be?

CD: We try to stay true to ourselves and be honest. We’ve done that our entire career and we’ll continue to stick to our guns and keep making music that we live and breathe. We’ve put in a lot of time and we’ve dedicated our entire life to making music and that’s what we’re all about.

GV: One last question: What’s the best advice you’ve ever been given… and who gave you that advice?

CD: Donnie, do you want to answer that one?

DD: My dad. You have to dream big, and don’t ever give up. If you want it, you have to go get it… nobody’s going to hand it to you. My grandpa and my dad always had a saying that they raised me with while working out on the farm, or even with school work, or playing ball, or playing music. They’d say, “Don’t worry about the mule going blind, just keep loading the wagon.” And I’ve got that engraved on the belt buckle that I wear everyday. Follow your dreams and keep grindin’. Don’t ever give up.

GV: That’s what you’re all about, right? Have a dream and fight for it.

DD: That’s right, man. Never stop fighting, stick together, and take care of each other.

GV: And if you’re lucky, you can start working on a new song titled “Rich Boyz,” right?

DD: (laughing) Hopefully, by the next time I talk to you, man, maybe that’s what we’ll be working on.

GV: Well, you know what the motto for Clarksburg, West Virginia is: Proud Past…Unlimited Future. Sounds like you guys are the right ones to represent back home.

To keep up with the Davisson Brothers Band, visit their official website.